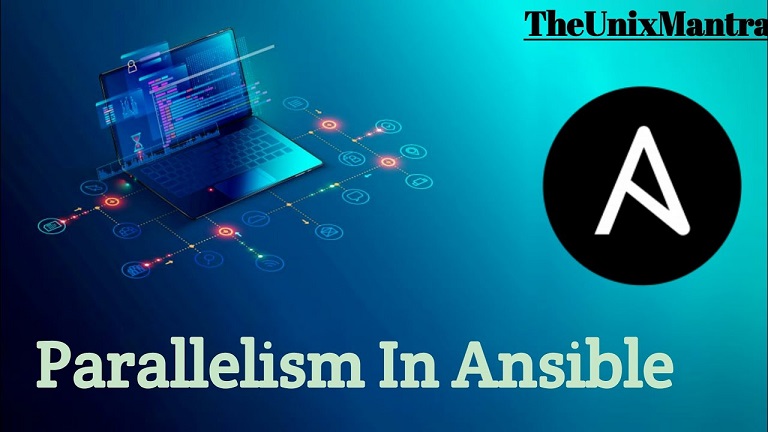 Ansible allows much more control over the execution of the playbook by running the tasks in parallel on all hosts. By default, Ansible only fork up to five times, so it will run a particular task on five different machines at once.

This value is set in the Ansible configuration file ansible.cfg.

When there are a large number of managed hosts (more than five), the forks parameter can be changed to something more suitable for the environment. The default value can be either overridden in the configuration file or the value can be changed using the --forks option for the ansible-playbook or ansible commands.

Running tasks in parallel
For any specific play, you can use the serial keyword in a playbook to temporarily reduce the number of machines running in parallel from the fork count specified in the Ansible configuration file. The serial keyword is primarily used to control rolling updates.

Ansible, regardless of the number of forks set, only spins up the tasks based on the current number of hosts in a play.

Asynchronous tasks
There are some system operations that take a while to complete. For example, when downloading a large file or rebooting a server, such tasks takes a long time to complete. Using parallelism and forks, Ansible starts the command quickly on the managed hosts, then polls the hosts for status
until they are all finished.

To run an operation in parallel, use the async and poll keywords. The async keyword triggers Ansible to run the job in the background and can be checked later, and its value will be the maximum time that Ansible will wait for the command to complete. The value of poll indicates to Ansible how often to poll to check if the command has been completed. The default poll value is 10 seconds.

In the example, the get_url module takes a long time to download a file and async: 3600 instructs Ansible to wait for 3600 seconds to complete the task and poll: 10 is the polling time in seconds to check if the download is complete.

Deferring asynchronous tasks
Long running operations or maintenance scripts can be carried out with other tasks, whereas checks for completion can be deferred until later using the wait_for module. To configure Ansible to not wait for the job to complete, set the value of poll to 0 so that Ansible starts the command and instead of polling for its completion it moves to the next tasks.

Note
The shorthand syntax for delegating to 127.0.0.1, can be also be written by use of the local_action keyword.

For the running tasks that take an extremely long time to run, you can configure Ansible to wait for the job as long as it takes. To do this, set the value of async to 0.

Asynchronous task status
While an asynchronous task is running, you can also check its completion status by using Ansible async_status module. The module requires the job or task identifier as its parameter.

The output of playbook when executed:

In this exercise, you will run a playbook which uses a script to performs a long-running process on using an asynchronous task. Instead of waiting for the task to get completed, will check the status using the async_status module.

Create a script file named longfiles.j2 under the ~/paralellism/templates
directory, with the following content.

In the playbook file async.yml, define a tasks to:

Copy the longfiles.j2 script from templates directory to the managed host under /usr/local/bin/longfiles. Change the file and group ownership to root, and change permission of the script to 0755.
Define a task and use the async keyword to:

Run the longfiles file copied previously under /usr/local/bin/longfiles with arguments foo, bar, and baz and the their corresponding output files /tmp/foo.file, /tmp/bar.file and /tmp/baz.file respectively. For example: /usr/local/bin/longfiles foo /tmp/foo.file. Use the async keyword to wait the for the task until 110 second and set the value of poll to 0 so that Ansible starts the command then runs in the background. Register a script_sleeper variable to store the completion status of the command started.

The completed async.yml playbook should have the following content:

Check the syntax of the async.yml playbook. Correct any errors that you find.

Run the playbook async.yml.
Observe the job ids listed as ansible_job_id to each job running, that were run in parallel using the async keyword. The task check status of longfiles script retries to see if the started jobs are complete using the async_status Ansible module.

Create a playbook named upgrade_webserver.yml. Use the hosts that are part of the webservers inventory group and use privilege escalation using remote user devops. As the updates needs to pushed to one
server at a time, use the serial keyword with its value as 1.

Create a task to copy the updated page template from the directory templates/index-ver1.html.j2 to the web server’s document root as /var/www/html/index.html. Also register a variable, pageupgrade, which will be used later to invoke other tasks.

Create a task to restart the web servers using the command module. Use an asynchronous task that will not wait more than 1 second for it to complete.  The task should not be polled for completion. Set poll to 0 to disable polling. Use ignore_errors as true and execute the task if the previously registered pageupgrade variable has changed.

Create a task to wait for the web server port to be started. As in the preconfigured web server, the httpd service is configured to start at boot time. Specify the host as inventory_hostname, port as 80, state as started, and timeout as 20.

Create a final task to add the web server after the upgrade of the web page back to the load balancer pool. Use the haproxy Ansible module to add the server back to the HAProxy load balancer pool. The task needs to be delegated to all members of the [lbserver] inventory group. The haproxy module is used to enable a back end server from HAProxy using socket commands. To enable a back end server from the back end pool named app, socket path as /var/lib/haproxy/stats, and wait=yes to wait until the server reports healthy status, use the following:

The following should be the contents of upgrade-webserver.yml: