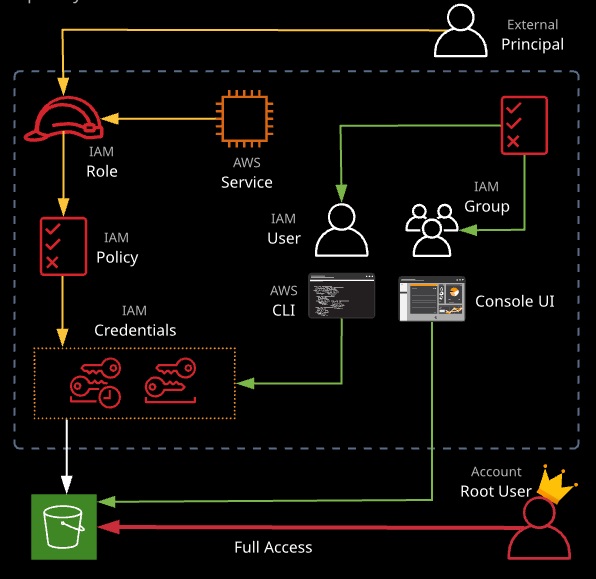 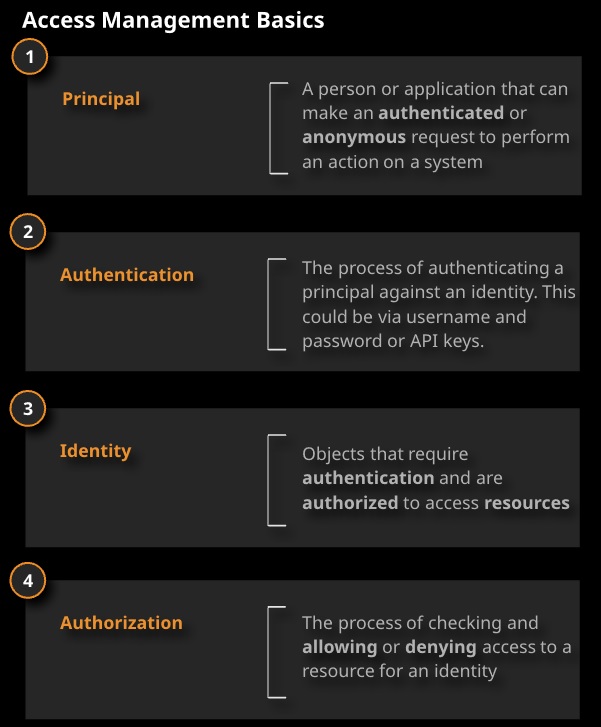 • The user created when an AWS account is created.

• The root user should not be used for dailywork and administration:

• Another user should be created for daily work that has admin rights.

• The root user should always use multi-factor authentication (MFA), like Google Authenticator.

• A new user has an implicit deny for all AWS services, requiring a policy be added to grant them access.

• Users can have IAM policies applied directly to them, or they can be a member of a group that has policies attached.

• With policies, an explicit deny always overrides an explicit allow from attached policies:  For instance, all policies attached to a user will be ignored if a single deny-all policy is added.

• Allow for policy assignments to multiple users at the same time

• Permissions may be assigned to group

• More organized and efficient way to manage users and policies

• Users may be a member of multiple groups 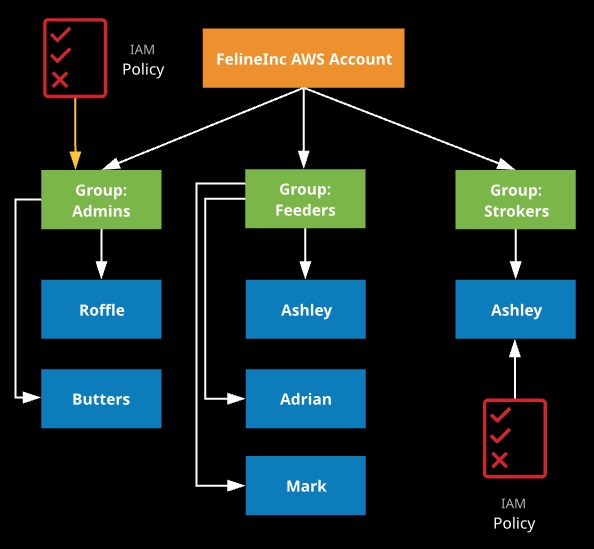 Access keys are a pair of values used by applications, SDKs, or the AWS command line to authenticate to AWS.

The access key ID is the public part of the key and is stored by AWS once generated.

An IAM user is the only identity that uses access keys. They are allowed two sets. They can be created, deleted, enabled, and disabled.
They can’t be used to log in to the console, and they don’t expire. If anyone finds a set of access keys, they have access to the permissions of the IAM user to which they belong.

• A document that states one or more permissions (JSON formatted).

• This allows for the use of a deny-all policy to quickly restrict all access a user may have.

A least privilege approach should be used when assigning permissions. 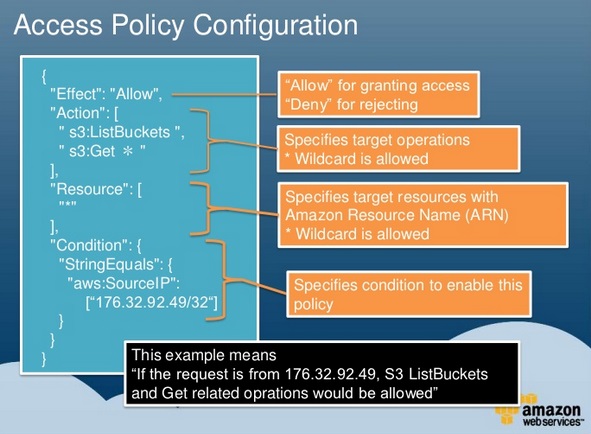 •  Created and managed by AWS

• AWS provides pre-built policy templates to assign to users and groups. Examples include:

– Read-only access: Only view AWS resources (e.g., user can only view what is in an S3 bucket)

• You can also create custom IAM permission policies using the policy generator or write them from scratch.

• More than one policy can be attached to a user or group at the same time.

• Policies cannot be directly attached to AWS resources (such as an EC2 instance).

• Another entity can assume the specific permissions defined by the role.

– AWS resources (such as an EC2 instance)

• Roles must be used because policies cannot be directly attached to AWS services.

• Services can only have one role attached at a time.

• You should never pass or store credentials to an EC2 instance — instead, use roles.

– An EC2 instance needs to be able to read data from an S3 bucket: The instance assumes a role with S3 read-only permissions from IAM. The instance can then read objects from the bucket specified in the role’s policies. You may change roles on running EC2 instances through the console and CLI.

Other Uses of Roles

– Users outside AWS can assume a role for temporary access to AWS       accounts and resources. 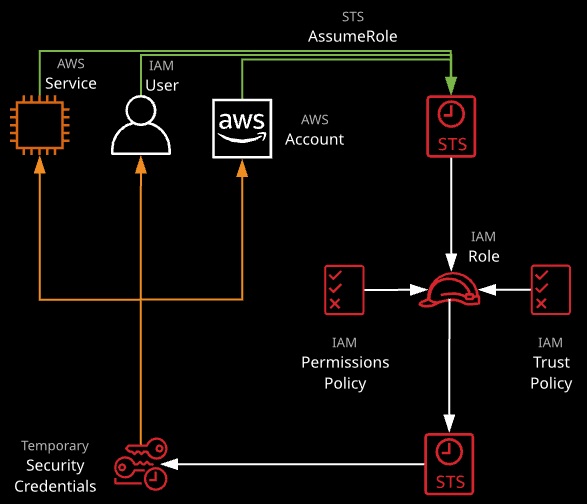 Role switching is a method of accessing one account from another using only one set of credentials. It is used both within AWS Organizations and between two unconnected accounts.

3….and, using that role, it can operate inside Account B. 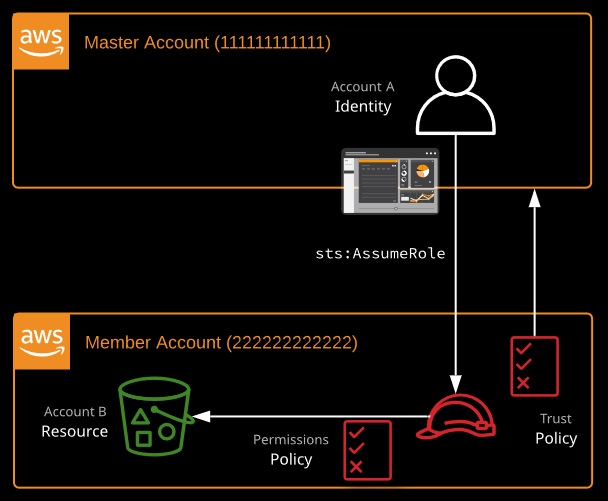 When you attach a policy to a principal to grant that principal access, the policy is called a permissions policy. You can also use a policy to define permissions boundaries, which let you limit the maximum permissons an IAM principal can be assigned.

For example you may create the following policy that allows all actions for the EC2 service and than attach that policy to an IAM useer as a permissions boundary:

If you then attach to the user the AdministratorAccess policy – which grant full access to all AWS services – the user will still only be able to perform actions in EC2.

• One authentication option we have with AWS uses time-based codes.

• Familiar example of MFA: You go to an ATM to withdraw money from your bank account. This requires both the physical card and a PIN. This example uses two-factor authentication, which is a form of MFA.

• Users type in their username and password as well as a time-based code:

• The username and password are not enough to be authenticated.

• The time-based code can be on the user’s computer, smartphone, or a device they carry around. 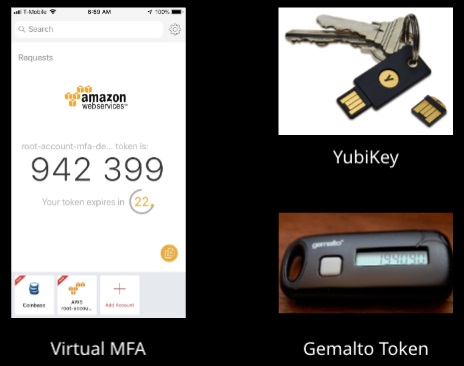 STS is an extension of IAM that allows for management of temporary security credentials for IAM users or federated users.