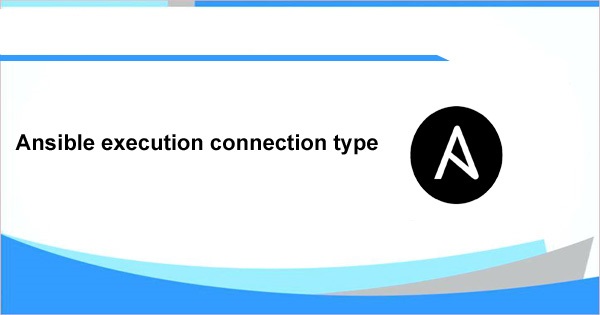 Connection types determine how Ansible connects to managed hosts in order to communicate with them. By default, Ansible uses the SSH protocol for remote connection to target nodes. Assuming pipelining is not enabled, Ansible uses this SSH connection to transfer modules and template files, to run remote commands, and to run the plays in the playbook on managed hosts. Thus having a fast, stable, and secure SSH connection is of paramount importance to Ansible. Besides ssh, Ansible offers other connection types which can be used to connect to managedhosts, including paramiko, and local. The connection type can be specified in the Ansible configuration file (ansible.cfg), in the inventory on a host or group basis, inside a playbook, or
on the command-line interface.

The pipelining feature reduces the number of SSH operations required to execute a module on the remote server, by executing many ansible modules without actual file transfer. To support pipelining, the requiretty feature must be disabled in the sudoers file on the managed hosts. Pipelining is enabled by setting pipelining to true in the [ssh_connection] section of the Ansible configuration file.

The 60 second default value may be changed to something much higher to accept connections, even though the initial connection has exited and the connection is in an idle state for a longer time. This value should be set depending on the length of time it takes for playbooks to run and the frequency of running playbooks. A value of 30 minutes may be more
appropriate:

• paramiko: Paramiko is a Python implementation of the SSHv2 protocol. Ansible supports it as the connection type for backward compatibility for RHEL6 and earlier, which did not have support for the ControlPersist setting in their OpenSSH version.
• local: The local connection runs commands locally, instead of running over SSH.
• ssh: The ssh connection uses an OpenSSH-based connection, which supports ControlPersist technology.
• docker: Ansible offers a new docker connection type. It connects to containers using the docker exec command.

Ansible ships with other connection type plug-ins like chroot, libvirt_lxc, jail for FreeBSD jail environments, and the recently added winrm, which uses the Python pywinrm module to communicate to Windows remote hosts that do not have SSH but support PowerShell remoting. Ansible connection types are pluggable and extensible and additional connection types are
planned for future releases.

The transport global value can be overridden by using the -c TRANSPORTNAME option while running an ad hoc command with ansible or running a playbook with ansible-playbook. The default settings related to each individual connection type appear as comments beneath their respective connection headings in /etc/ansible/ansible.cfg. They can be overridden
specifying that directive with a different value in the controlling ansible.cfg file. The settings for the ssh connection type are specified under the [ssh_connection] section. Likewise, the settings for paramiko can be found under the [paramiko_connection] section. The following example shows some of the default ssh connection type options.

Important
Administrators should usually leave the connection type set to smart in
ansible.cfg, and configure playbooks or inventory files to choose an alternative connection setting when necessary.

Alternatively, the connection type can be set with the connection: CONNECTIONTYPE parameter in a playbook as shown in the following example.

Create a new directory called templates. Below it, create a file named template.j2. This file should be copied to the managed host and changed based on the environment variables specified in the playbook. This template file replaces the variables to create an inventory file on the respective host under /tmp/hostname. Insert a line that replaces the $GROUPNAME environment variable (defined in the playbook later) with the inventory group name. Insert several lines to define the inventory_hostname, the ansible_host, and the connection_type variables. Set these using magic variables and predefined variables. The file should contain the following:

Create a playbook named connection.yml that copies the template template.j2 to the destination host under /tmp/ and names the file as that of its host name specified in the inventory file (for example, /tmp/hostname).
The playbook should also define the environment variable named $GROUPNAME and set its value to testservers, to define the group name in the inventory file when copied to respective managed hosts using the template template.j2. The connection.yml file should contain the following:

Execute the playbook connection.yml from its the working directory