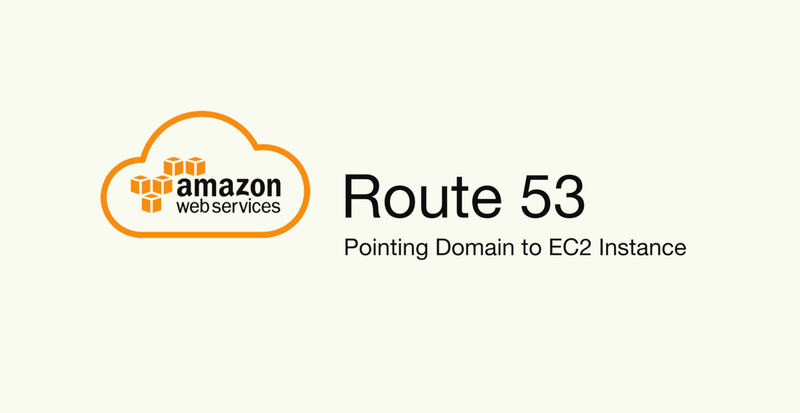 Trust starts somewhere. The DNS root servers are that trust — a group of servers that are authoritative to give answers about the root zone. TLDs are controlled by the root zone.

The top tier in the DNS hierarchy. Generally structured into geographic codes — such as .au, .us, .uk — and generic TLDs — such as .com, .org, and .edu. Large orgs or country orgs are delegated control of these by the root servers to be authoritative.

Anything between a host and a TLD is a subdomain. example.com is a .com subdomain..co.uk is a subdomain of .uk — an organization is delegated control of subdomains and is authoritative.

A zone or zone file is a mapping of IPs and hosts for a given subdomain. The zone file for example.com would contain a record for www.

DNS has lots of record types — A, MX, AAM, CNAME, TXT, NS (explained later) — and each does different things.

A name server is a server that runs a DNS service and can either store or cache information for the DNS platform. Whether a name server caches or acts as an authority depends on if it’s referenced from a higher level. (See authoritative below.)

A record in a zone file: www, mail, catgifserver, doggowebserver. 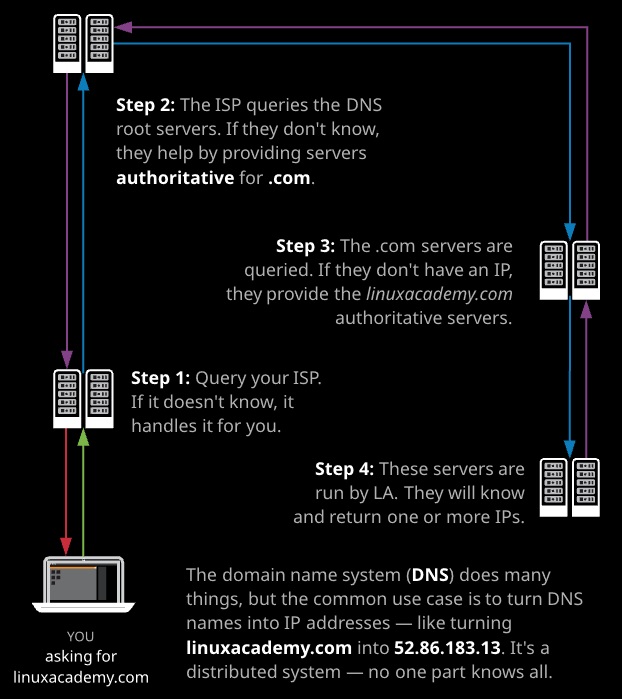 Registering a domain within DNS consists of a few steps and components. With many services — such as Route 53, Hover.com, and even GoDaddy — these steps appear to happen together.

STEP 1: Check the domain is available: This step is usually done during registration, but for a given domain, a check needs to occur against the database of the TLD or subdomain operator. Registering bestcatpicsintheworldevercom requires a check with Verisign who operate .com, and registering amazingcats.co.uk would need a check against .co.uk.

STEP 2: Purchase the domain via a registrar The domain operator allows companies to sell domains within the domain it manages. Buying a something.com domain via Route 53 means Route 53 taking payment and then contacting Verisign (.com operator) and adding a record into the .com zone that represents your domain.

STEP 3: Hosting the domain: Registering a .com domain gives you the rights to specify name servers (NS) to be authoritative for that domain. You need to manage or pay for DNS hosting or name servers that are configured for your domain, and inform the .com operator to link those servers with your domain record. Route 53 allows you to register a domain and host it, or just host it, or just register it.

STEP 4: Records in the zone file: On the Name Servers that are authoritative/host the domain, you need to add records into the zone file — www, mail, ftp, etc. This completes the chain, and these are accessible from the Internet.

A zone or hosted zone is a container for DNS records relating to a particular domain (e.g., example.com). Route 53 supports public hosted zones, which influence the domain that is visible from the Internet and VPCs. Private hosted zones are similar but accessible only from the VPCs they are associated with.

DNS supports different types of records, each providing different functionality. At an associate level, the important ones are:

CNAME Record: Allows aliases to be created (not the same as an alias record). A machine such as allthethings.linuxocadetny.com might have CNAMES for www, ftp, and images. Each of these CNAMEs points at an existing record in the domain. www -> alltherhings.example.com. CNAMEs cannot be used at the APEX of a domain (e.g., example.corn).

MX Record: MX records provide the mail servers for a given domain. Each MX record has a priority. Remote mail servers use this to locate the server to use when sending to someuser@example.com.

NS Record: Used to set the authoritative servers for a subdomain.com would have NS servers for example.corn.

Alias Records: An extension of CNAME — can be used like an A record, with the functionality of a CNAME and none of the limitations. Can refer to AWS logical services (load balancers, S3 buckets), and AWS doesn’t charge for queries of alias records against AWS resources.

Health checks can be created within Route 53 and are used to influence Route 53 routing decisions. There are three type of health checks: 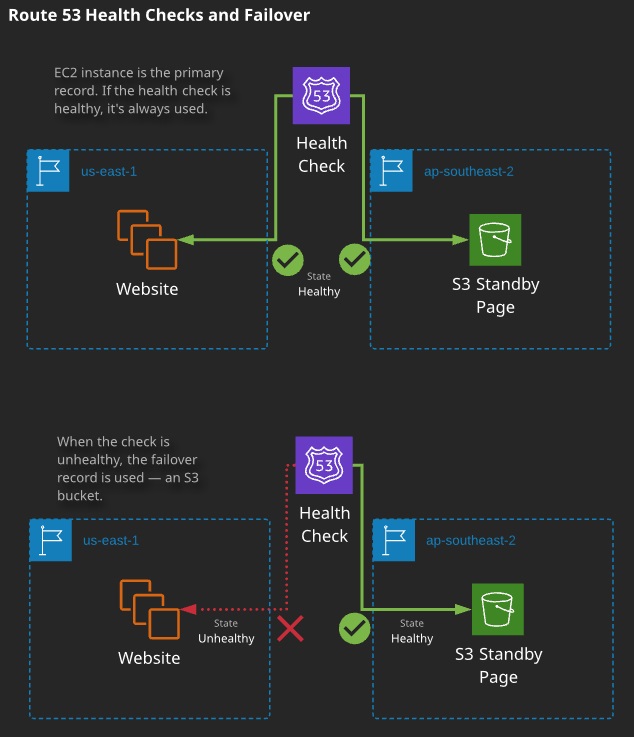 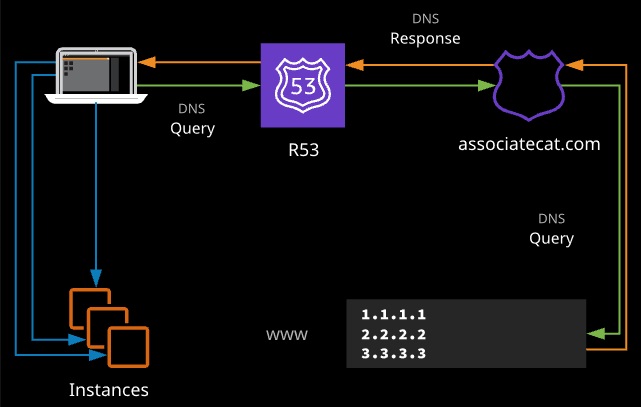 The DNS client (the laptop) receives a randomized list of IPs as a result. The client can select the appropriate one and, in this example, initiate an HTTP session with a resource.

Pros: Simple, the default, even spread of requests

Cons: No performance control, no granular health checks, for alias type — only a single AWS resource 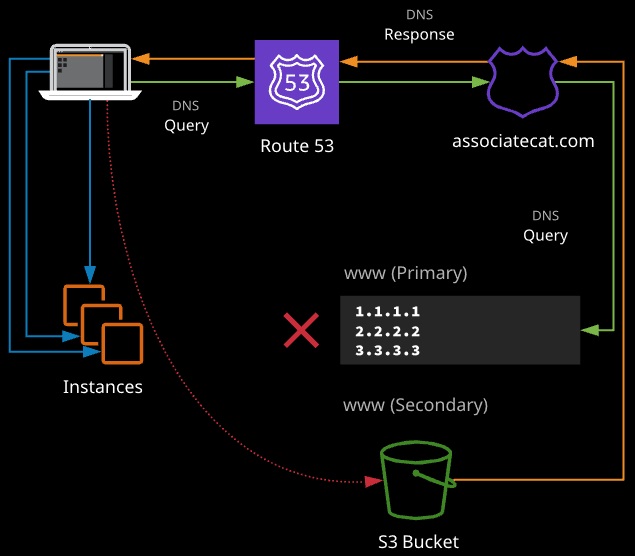 Failover can be combined with other types to allow multiple primary and secondary records. Generally, failover is used to provide emergency resources during failures. 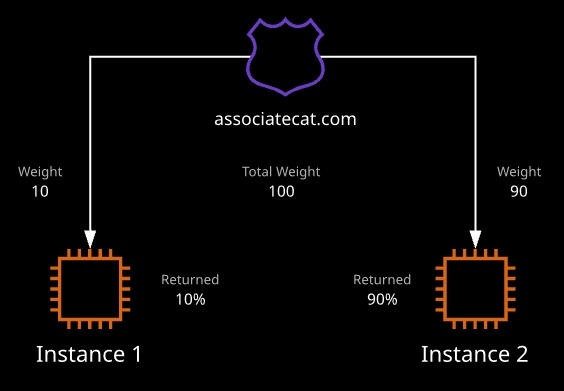 Records are returned based on a ratio of their weight to the total weight, assuming records are healthy. 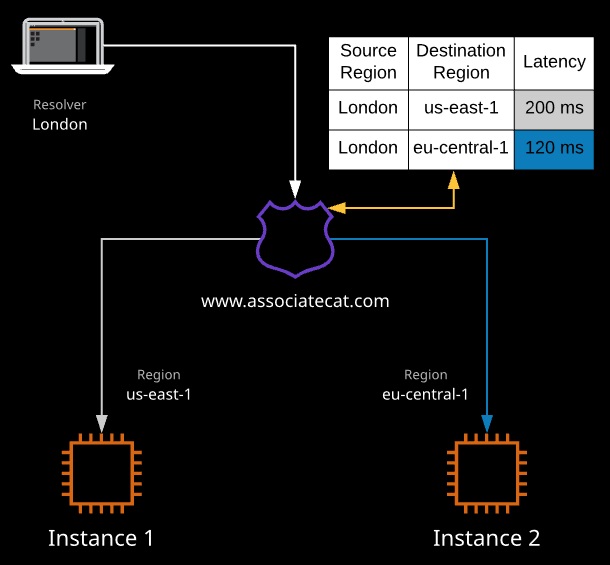 A record set can be set as the default that gets returned if the IP matching process fails or if no record set is configured for the originating query region. 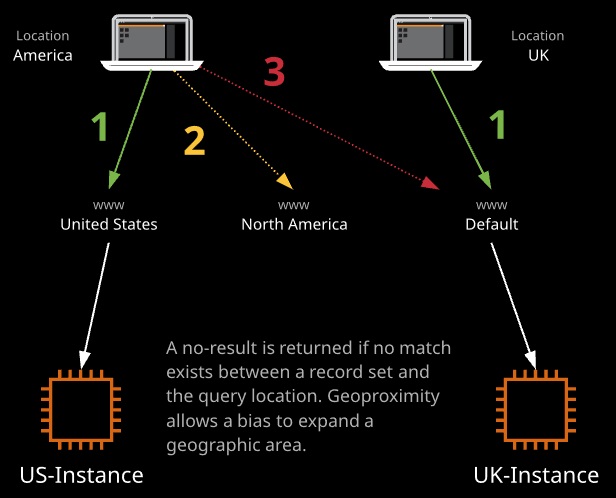